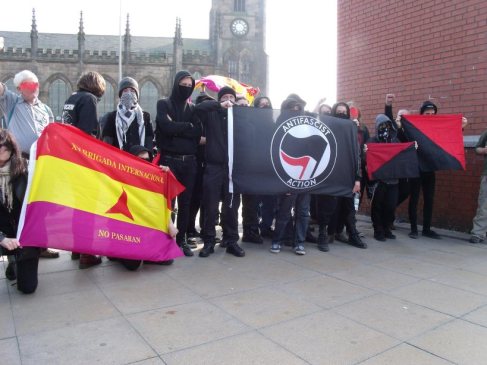 Following a call for a counter-demo against the North-West Infidels/Combined Ex-Forces demo in Bolton, around 50 militant anti-fascists were mobilized in Liverpool and travelled to oppose fascism on the streets of Bolton, joined by a number of comrades from Manchester, Sheffield, Brighton and the Solent.

We arrived in Bolton and stopped around a mile from the proposed site of the fascist demo and began to make our way on foot into the town centre. The centre of town was quite a vibrant place, with a market taking place in one of the squares, but we encountered little in the way of fascists during the walk in.

After assessing the proposed fascist demo site and seeing no fascists in the vicinity, we began to walk around Bolton town centre in search of any signs of them. After searching for an hour or two and finding nothing, avoiding contact with the police as we went, we returned to the demo site to find a tiny contingent of fascists behind police barriers. There were also a number of fascists rumoured to still be in surrounding pubs. The sight of over 50 anti-fascists rolling up outside could only have encouraged them to stay inside with their pints of Carling.

A contingent of UAF were also standing in a static demo opposite the tiny fascist presence. We stayed clear of this to avoid the possibility of a kettle following the demos, preferring to remain mobile and able to respond to anything taking place outside of the police barriers.

After a while, the police allowed the fascists to pack up and leave, quietly and with their tails between their legs. The UAF also left shortly after to march in the opposite direction. We attempted to follow the fascists away from the demo site but were stopped by a large and fairly aggressive police roadblock. Following this, we made our way to the train station to see if we could find any fascists there. There was no sign of them here. While pondering our next move, we began to get surrounded by a large police presence which had just arrived. We tried to move away from the station but were aggressively kettled by a police contingent which outnumbered us almost 2:1, supposedly as there was an imminent danger of a breach of the peace.

A couple of comrades were injured and arrested by police during the kettle. Fortunately the injuries weren’t serious and they were released almost immediately. Following the kettle, we decided to move back to the front of the station and call our coach to collect us. As we were making our way back, a couple of knuckledraggers at the side of the road decided to start chanting “BNP” at us, and they were swiftly removed and arrested by the police.

This was a good day for anti-fascism in the north-west. Turnout was excellent and a large contingent of anti-fascists was able to walk unmolested around Bolton and the fascists were incapable of controlling the streets, beating a hasty retreat out of town following an ineffectual demonstration with minimal turnout.

They did not pass.

Further reports from today can be read here, here and here.