Today, Saturday 17th March 2012, members of Liverpool Solidarity Federation accompanied John Foley in a picket at Liverpool John Lennon Airport in support of the Ryanair Don’t Care campaign.  The picket took place as part of an international week of action to try to both draw public attention to Ryanair Don’t Care, and to exert pressure on Ryanair and the businesses that facilitate and benefit from their recruitment scam.

Earlier in the week we had given out leaflets in Liverpool city centre to try to raise awareness of Ryanair’s policy of “recruitment for termination” for young probationary cabin crew and to also draw attention to the action today.  Yesterday we also paid a visit yesterday to two key parts of the Ryanair recruitment scam – Allied Irish Bank and Daniels Silverman solicitors, both with offices in Liverpool city centre.

Allied Irish Bank had, until recently, provided trainee cabin crew with 3500 Euro loans which were paid to Ryanair by trainee crew so Ryanair could provide training.  Following pressure from Ryanair Don’t Care, the bank stopped providing these loans in 2010.  However, they are still chasing terminated cabin crew for repayments, sending letters containing threats of bankruptcy.

Today we met at Lime Street station and travelled on from there by bus to the airport.  Upon arriving we set up the picket next to one of several entrances to the building and began to hand out leaflets to passengers, visitors, and airport and airline staff.  We were approached at one point by a police inspector who relayed his intention to be a hands-off presence. Following this the police kept their distance, and eventually left the front of the building entirely.

We decided to expand the picket to cover as many entrances as possible, and individuals were dispatched to each door to catch entering and exiting punters and get the leaflets into as many hands as we could.  At one point we were approached by an individual who worked for Ryanair. The individual did not take a leaflet but let us know that she supported today’s action.  Many members of the public took leaflets and engaged us in conversation about the purpose of the picket. The message was certainly getting across.

Later, we were approached by a group of Spanish travellers coming through the airport.  These happened to be CNT members arriving for a holiday, and they spent some time with us on the picket, picking up information and taking leaflets.

Towards the end of the picket, an Irish hen party passing through the airport showed their support, taking a good amount of leaflets to hand out on their travels and taking the opportunity to get a photo with the famous John Foley!  A photograph was also taken in front of the Ryanair ticket desk with the Ryanair Don’t Care banner.  Hopefully the message got across there too.

It’s been quite a successful week for Ryanair Don’t Care in Liverpool during the international week of action.  Hundreds of leaflets have been handed out, getting the message into lots of heads.  People have been actively engaging with use throughout the week on the subject of Ryanair’s policy of “recruitment for termination” with respect to probationary cabin crew.  Direct action against companies involved in the scam has increased the pressure on them and placed the demands of the Ryanair Don’t Care campaign into the hands of the exploiters. An incidental point about this week being that it has also showed the power of direct action, with many people recognizing John and the campaign from recent actions he has undertaken.

The message is a shocking one for some, but doesn’t seem to surprise most.  Ryanair, and the companies who help and benefit from their recruitment scam, must be exposed so that no more young people are duped into debt, depression and worse.  Pressure must be placed on these companies so that they are forced to seriously consider their place in this scam.   John Foley will not rest until Ryanair stop their exploitation of young people across Europe, and Liverpool Solidarity Federation will continue to support him – an injury to one is an injury to all. 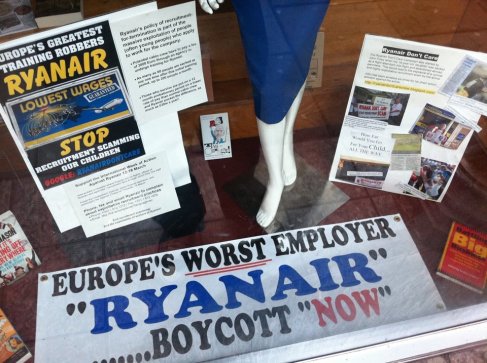